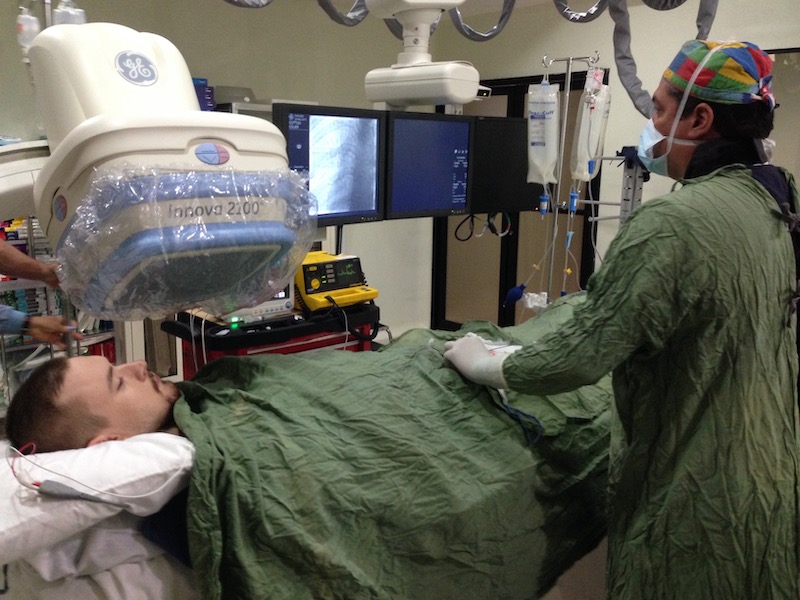 Regenocyte provides the best treatments for Cardiomyopathy and Heart failure due to the most advanced stem cell processing and delivery technology. Our experience and results are unsurpassed. Please read below a study that was done on a group of our earliest patients.

Objective; The goal of this study is to investigate the feasibility, safety, and clinical outcome of patients with Ischemic Cardiomyopathy treated with Autologous Angiogenic and Cardio-Regenerative Progenitor cells (ACP’s) in a prospective fashion.

Background; In numerous human trials there is evidence of improvement in the ejection fractions of Cardiomyopathy patients treated with ACP’s. Animal experiments, not only show improvement in cardiac function, but also engraftment and differentiation of ACP’s into cardiomyocytes as well as neovascularization in infected myocardium. In our clinical experience the process has shown to be safe as well as effective.

Methods; We conducted a prospective, non-randomized study evaluating the effects of ACPs (ex vivo expanded and differentiated peripheral blood stem cells) implanted in sixteen patients with chronic ischemic cardiomyopathy (Ejection fractions < 45%) with congestive heart failure symptoms of at least NYHA class II. ACP’s where implanted via either intramyocardial injection or intracoronary infusion. Patients where optimized medically prior to ACP’s therapy with standard medical therapy for CHF as well as revascularization and upgraded to Bi-ventricular defibrillators when indicated. Ejection fractions where recorded at baseline then at 3 and 6 months using MUGA at rest as well as at stress (dobutamine protocol). The primary end points were changes in rest and stress ejection fractions.

Conclusion; This study exemplifies that ACP’s can improve the ejection fraction in patients with severely reduced cardiac function with benefits sustained to six months. These patients will continue to be followed in a similar fashion to determine long term outcomes. Other secondary outcomes will also be followed including cardiac events, hospitalizations, mortality, functional class, cardiac dimensions.

Despite significant advances in the new therapeutic modalities and prevention, cardiac disorders are very prevalent all over the world. The magnitude of the problem will increase considerably in the future due to increasing life expectancy and the prevalence of diabetes. In spite of considerable advances in medical therapy and improvements in revascularization procedures for coronary artery disease, a substantial proportion of patients who suffer from angina pectoris and heart failure are not responsive to maximal medical and surgical treatment modalities. Importantly Cardiovascular Disease is at the top of the list for medical expenditures in the United States of America. With the majority of dollars spent on hospitalizations for congestive heart failure. Consequently, effective alternative therapies for these patients would have far reaching benefits.

Regenocyte’s therapeutic strategy collects blood samples from patients, isolates peripheral blood mononuclear cells, and grows these cells in conditions that will cause a significant increase of the number of progenitor cells as well as partially differentiate these cells into a population specifically targeted at cardiac regeneration.

Following this culturing stage, the ACPs are harvested, packaged, and transported to the treatment center to be injected into the coronary vessels and myocardium of the patients. The final cell product is known as Regenocytes.

Regenocyte therapy treats patients suffering from angina pectoris or cardiomyopathy, not responsive to maximal drug treatment or not willing or without option of undergoing coronary artery bypass graft (CABG) surgery or PCI. The use of ACPs pro- motes the formation of neovascularization and viable myocardial tissue.

Angiogenic Cell Precursors (ACPs) or Endothelial progenitor cells (ECPs) possess the ability to differentiate into endothelium, the layer of cells involved in both the forming of blood vessels (neovascularization) and the lining of their lumen (endothelialization). These functions of the ACPs enable the development of new therapies that aim to use these cells for the treatment of severe vascular disorders.

The first evidence indicating the presence of ACPs in the adult circulation was obtained when mononuclear blood cells from healthy human volunteers were shown to acquire an endothelial cell–like phenotype in vitro and to incorporate into capillaries in vivo (11). These putative ACPs were characterized via expression of CD34 and vascular endothelial growth factor receptor-2 (VEGFR-2), two antigens shared by embryonic en- dothelial progenitors, and hematopoietic stem cells. In addition to CD34, early hematopoietic progenitor cells express CD133 (AC133), which is not expressed after differentiation. Currently, the widely accepted definition of ACPs in circulation is, for practical purposes, CD34+/VEGFR-2+ or CD133+/VEGFR-2+ cells.

The fact that ACPs can take part in the formation of new blood vessels was first observed by Bhattacharya and colleagues who showed the formation of capillary-like structures from hematopoietic stem cells or ex-vivo expanded ACPs (12,13). The contribution of bone marrow-derived cells, mainly ACPs, to neovascularization after ischemic injury in vivo, was shown in experiments using labeled populations of stem cells to reconstitute lethally irradiated mice. The cells or their progeny were shown to migrate into ischemic cardiac muscle and blood vessels, differentiate to cardiomyocytes and endothelial cells, and contribute to the formation of functional tissue (14). Other work, involving a mouse retinopathy model, demonstrated the important role that the recruitment of endothelial precursors to sites of ischemic injury plays in neovascularization (15).

The majority of ACPs reside in the bone marrow in close association with Hematopoietic Stem Cells (HSCs) and bone marrow stromal cells that provide the microenvironment for hematopoiesis. ACPs have been shown to mobilize (i.e. migrate in increased numbers from the bone marrow into circulation) in patients with vascular trauma or Acute Myocardial Infarction (AMI) (16, 17), or in response to Administration of VEGF via gene transfer (18, 19). The sources of Autologous Angiogenic Cell Precursors that can be used for treatment varies and include bone marrow, peripheral blood and different mesenchymal organs. The use of cells from peripheral blood has the advantage of being more uniform easier to characterize and control and that their collection is easier (without anesthesia). The disadvantages are the relative small number of Angiogenic Cell Precursors in peripheral blood which requires a relatively large volume of blood and the time consuming process of augmentation.

The use of Angiogenic Cell Precursors promotes the formation of neovascularization as well as new myocardial cells in the failing heart and as a consequence attenuates congestive failure.

Considerable work has been carried out to elucidate the mechanisms be- hind ACP’s mobilization, localization and function. Progress has also been achieved in establishing therapeutic protocols for treating a variety of conditions, such as peripheral limb ischemia, acute myocardial ischemia and infarction by using progenitor cells.

The last few years have seen significant progress being achieved by clinical trials using therapeutic protocols for treating a variety of vascular conditions, such as peripheral limb ischemia, acute myocardial ischemia and infarction by using stem and progenitor cells. Clinical trials have been performed to test the safety and potential efficacy of several types of cells (8-24).

The trials showed considerable potential at alleviating these conditions with no serious adverse effects directly related to the cells administered. These studies demonstrated the potential safety of the administration of other peripheral blood–derived cells in humans suffering from myocardial and vascular diseases and the potential for enhancing myocardial function with associated improvement in symptoms as manifested in the patients’ physical condition and in objective cardiac function tests.

The parameters of heart performance were improvements in left ventricular ejection fraction (LVEF), improvement in cardiac perfusion and in angina score. The results of these trials are in general promising after follow-up of 4-16 months. Adverse effects were minimal and were not related to administration of the ACPs.

However, most studies have the dis- advantage of having been small series, conducted as open label trials and only some of them included a control group. When considering the benefit of stem cell treatment there is wide agreement that these treatments are safe and carry minimal risk to patients, as supported by “The Consensus Of The Task Force

Sixteen patients with cardiomyopathy and congestive heart failure were selected based on the following guidelines.

(to exclude the potential of non- autologous ACPs in the harvested blood).

The following tests were performed at baseline and at 3 and 6 month fol- low-up visits to measure subjective and objective parameters of the treatment:

The Final Cell Product (Regenocytes) consisted of Autologous Angiogenic Cells Precursors isolated from the patient’s blood and then expanded and partially differentiated ex vivo under sterile conditions. The cells were divided into 3 syringes suspended in 15 ml sterile cell culture medium. The product was sterile and pyrogen-free.

Acceptable biological parameters as assessed by microscopy and flow cytometry that were in accordance with the following specifications:

The final cell product was also tested for safety based on the following:

Patients with cardiomyopathy and congestive heart failure were transferred to the cardiac catheterization laboratory approximately one hour before the anticipated arrival of the cells. Coronary angiography was performed to define the artery or arteries planned to be used for the cell injection. The administration was performed intracoronary utilizing an over-the-wire balloon catheter and following a specific delivery protocol or by intramyocardial injection.

There were no adverse events associated with the ACP’s. No cardiac events occurred. There was one severe adverse event. One patient suffered a CVA during one of the cardiac catheterizations and was therefore excluded from the group.

We found treated patients with cardiomyopathy and congestive heart failure exhibiting a significant increase in ejection fraction from baseline that was sustained to the six month time period. Baseline average resting EF (measured by MUGA) was 28% (range; 14% to 42%), with an average stress ( dobutamine) EF at 36% (range; 19% to 52%). At the three month mark resting EF had increased to 40% and the stress EF was at 50% and at six months the resting EF had reached 49% (range; 38% to 56%), and the stress EF was at 64.5% (range; 56% to 67%).

Congestive Heart failure and Cardiomyopathy  is estimated to affect 4 to 5 million Americans, with 550,000 new cases reported annually.(31) In the past 3 decades,both the incidence and prevalence of heart failure have in- creased. (31-33) Factors that have contributed to this increase are the aging US population and improved survival rates in patients with cardiovascular disease due to advancements in diagnostic techniques and medical and surgical therapies.(32-36) Heart failure is a chronic, progressive disease that is characterized by frequent hospital admissions and ultimately high mortality rates. Because of its high medical resource consumption, heart failure is the most costly cardiovascular illness in the United States.(37)

Advances in the treatment of heart failure and early intervention to prevent decompensation may delay dis- ease progression and improve survival. However the natural course of the disease is progressive deterioration. Despite increasing success in comprehensive treatment by conventional medical therapy refractory congestive heart failure continues to pose a difficult medical and economic problem.

The results of this study suggest that intracoronary and intramyocardial injection of autologous, peripheral blood-derived cell population enriched in Angiogenic Cell Precursors (ACPs) in patients with congestive heart failure is a safe and effective alternative treatment for patients who have exhausted other therapeutic options. In this study, such treatment resulted in significant increases in ejection fraction with a concomitant decrease in symptoms.

These results reflect the high potential of this cellular treatment as a novel adjunctive therapy for patients with cardiomyopathy and congestive heart failure.

Adult Stem Cell Treatment for the Brain and Spine:

Regenocyte Are Here to Help With Cardiomyopathy or Congestive Heart Failure

Regenocyte is here for you to treat Cardiovascular Disease and Cardiomyopathy

The most important aspect that makes Regenocyte better than other adult stem cell therapy clinics is the depth of our clinical experience. We have been treating patients with their own stem cells since 2006.