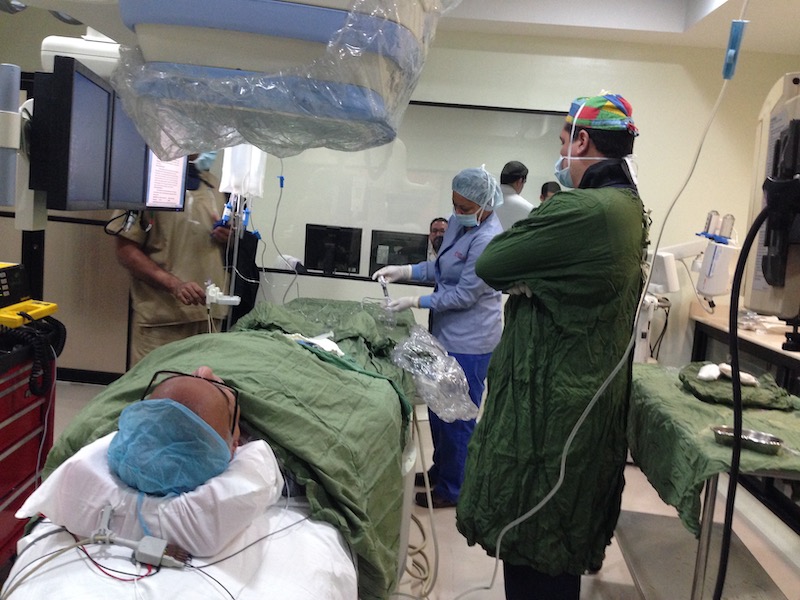 Intercellular Sciences announced that the four year follow up results for the initial patient treated with stem cells for pulmonary hypertension have shown long term benefit.

“It goes against traditional theory that we should try to fix the existing pulmonary vasculature, but we are regenerating pulmonary blood vessels with impressive results that are lasting beyond four years,” said Zannos Grekos M.D., head of the international team that developed the stem cell treatment protocol.

According to Grekos, the clinical study is a collaborative effort among physicians at Intercellular Sciences, a Florida-based stem cell clinic; researchers from TheraVitae, a biotechnology company in Tel Aviv, Israel; and physicians from Regenocyte Worldwide, Intercellular’s Dominican Republic division. The patient`s baseline and follow-up testing is being conducted in part by the Mayo Clinic, Jacksonville, Florida.

Patient Karl Wagner, 50 of Macon, Georgia, underwent the adult stem cell therapy on March 3, 2008. Since being diagnosed with pulmonary hypertension, Wagner was in rapid decline, requiring continuous oxygen at times. The stem cells were extracted from a blood sample taken from the patient. Those cells were then expanded and differentiated in the lab in Israel. Once analyzed the stem cells were redelivered to Wagner’s lungs by a catheter procedure.

I was being managed by medication, but still had violent chest pains, heart palpitations, extreme fatigue, and severe shortness of breath. I could barely do anything with my daughters and was on oxygen almost all the time. Doctors at Mayo Clinic had given me a three year prognosis in 2007 said Wagner. I don’t have any of those symptoms now.

Recent tests showed that at 4+ years, the patient had maintained the benefits from his stem cell treatments. Wagner’s cardiac ultrasounds completed at the Mayo Clinic in Jacksonville showed a significant initial decrease of the pulmonary artery mean pressure from a pre-treatment high of 41mmHg (severe) to a post treatment low of 28mmHg (mild). Wagner’s pulmonary pressures remained at 29mmHg at one year. The patients most recent ultrasound evaluation shows pulmonary mean of 34 mmHg (still in the mild range). The patient will continue to be monitored on a regular basis and it is expected that these numbers will continue to remain low. This is extremely encouraging, though need for a re-treatment is a possibility sometime in the future.

“This is the first time medical science has successfully reversed the actual disease process in pulmonary hypertension, a previously untreatable condition with a very grim prognosis,” Calcaterra explained. “Using advanced technology to proliferate and differentiate the stem cells into endothelial prognitor cells or Regenocytes and employing innovative delivery methods, we have been able to harness the regenerative power of stem cells and literally regenerate the damaged blood vessels in the lungs of the pulmonary hypertension patients.”

“I feel great,” he says, “and have a normal life again. I take my girls to school every morning and work all day. My quality of life is ten-fold what it used to be. I also am off almost all of my medications and the doctors at Mayo Clinic have given me a new prognosis.”

Learn About the Procedures in Stem Cell Treatment for Pulmonary Hypertension

In treating diseases like cardiomyopathy and peripheral vascular disease, we have had consistent success in generating viable heart tissue and growing new vessels. With the increased circulation, healing of wounds and improvement in ejection fractions, it seemed a natural progression to approach pulmonary hypertension in the same manner. I believe we have only begun to discover what adult stem cells can accomplish in altering the course of diseases now thought to be untreatable.

Adult Stem Cell Treatment for the Brain and Spine:

Is Stem Cell Treatment for Pulmonary Hypertension Right For You?

The most important aspect that makes Regenocyte better than other adult stem cell therapy clinics is the depth of our clinical experience. We have been treating patients with their own stem cells since 2006.